As the title of this post says, VCM did not turn out the way I had hoped it would. Before getting into what happened on Sunday, I am going to set the scene by sharing some highlights from the days before the race.

Thursday Night
I spoke with Coach Jeff to discuss a race plan. The hilliest parts of the course were in the first 16 miles. There was a slight uphill start, a steeper climb from the Northern Connector back into Burlington between miles 7-8, and then Battery St. at miles 15 -16. Coach said to relax and conserve my energy on the hills and then pick it up when the course flattened out. We talked about my training cycle and that all signs pointed to a stellar race in Burlington. He also said that the only thing that was going to be beat me was Mother Nature. Perhaps this was a sign of things to come.

Friday & Saturday:
The drive up to Burlington went smoothly. It was a beautiful drive through NY and Vermont farm country, We checked into the hotel and headed over to the expo at the Sheraton. It was great to meet Mike and his family, Sandra, and Elizabeth at the Daily Mile/Twitter meet-up. I picked up my bib and after walking around the expo for a bit, we headed back to the hotel for Shabbat.

It was so nice to have another Observant family to spend Shabbat with. Lil Ansky got along swimmingly with Mike's 3 children which made the long day go by quickly. At some point while we were sitting outside on the roof deck, I said to Mike if it's like this (hot and humid) tomorrow, I'm going to be in trouble. Omen #2. When Shabbat ended our families discussed some spectating logistics and I went to bed.

Sunday
I did not sleep very well Saturday night. I tossed and turned worried that I would sleep through my multiple alarms and miss the shuttle to the start. I got out of bed around 5:00 and prepared my usual pre-race meal, peanut butter and nutella (Lil Ansky called it PB &  N) on whole wheat bread and a glass of orange juice. I got dressed and met Mike in the lobby. The hotel staff was doing it's part to get in on the race day festivities. They left some goodies in the lobby for the runners and their families to enjoy. 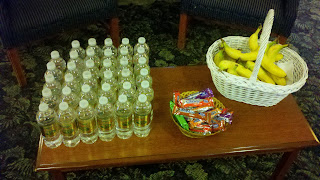 The atmosphere at Battery Park felt more like a small community 5k than a marathon. Runners and their families were milling around and taking shelter from the rain in the bandshell. 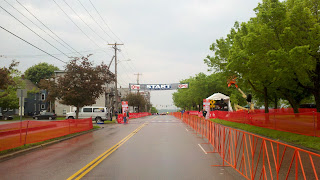 Finally, it was time to get into the corrals. Mike and I lined up at the 8:00/mile sign. It was still raining and cool. Shortly before the horn went off, I turned to Mike and said I'll be very happy if it stays like this the entire race. Omen #3. The horn goes off and it's time to race! The first part of the course loops through a residential part of Burlington. I had a hard time settling into a groove partly because the streets were narrow in many spots. As we came back into downtown Burlington I did quick system check. Everything felt fine, heart rate was where I wanted it, legs felt fine, no problem with the lungs. I started to struggle mentally on the climb up from the Northern Connector around mile 7. The rain had stopped, the sun was coming out, and the air was getting heavy. Mike caught up with me and told me I looked great. I was struggling up the hill but I knew my family was waiting for me at the top. Seeing Mrs. and Lil Ansky helped me get me out of my mental funk but shortly after seeing them around mile 9 I started to feel tightness in my chest. I knew right away that my asthma was starting to flare up. I pulled off to the side around mile 10 for 2 puffs of my inhaler and to slow down my breathing. At this point I knew that I wasn't running a 3:30 but I thought that if I took a few minutes to regroup I could still finish the race. I got back on the course at a slower pace but the tightness came back and was getting worse. I could not get enough air into my lungs. At mile 11.5 I saw a medical tent and told the medics that my asthma was flaring up and that I was done. My race was over.

What happened next was a little bit of a blur. I found my way to the half way point where the 2 person relay bus would take me to the finish line at Waterfront Park. Not exactly where I wanted to be but what choice did I have? My bag was there and I arranged with my family to meet at the reunion zone. On the bus I was talking with someone who complete the first half of the relay. He recently returned from deployment in Afghanistan and was telling me that last year he ran VCM virtually while in Afghanistan. Before we parted ways I thanked him for his service and congratulated him on completing his leg of the relay.

I picked up my bag from the baggage tent and spoke to my family. They were somewhat surprised that I dropped out because Mike had told them that I was OK but I was a few miles back. I told them I was OK and would meet them at the reunion zone. I was an emotional wreck and being around the finish line was not helping. The race organizers were announcing the names of the finishers as they crossed the line. My name should have been called. I trained my tuches off for this race. I endured many miles in sub-freezing temperatures, logged hundreds of pre-dawn miles, and ran a stellar half marathon earlier in the month! Sunday was supposed to be my reward for all of my hard work.

Mrs. and Lil Ansky greeted me with hugs, kisses, and encouragement. They said everything they were supposed but I wasn't hearing it. I was angry, disappointed, I even cried. My immediate reaction was to get the heck away from the festivities. I wanted to go back to the hotel, check out a day early, and drive home. Since the first hotel shuttle didn't leave Waterfront Park until 12:45, we were able to see Mike finish and hear his name over the PA system. It also gave me time to talk to Coach about what happened. He reminded me that I made the right decision and that I had nothing to prove by trying to finish. He told me that fellow PRSFIT teammate, Jen also pulled out with an asthma attack. Mother Nature had beaten us both.

Aftermath
We rode the shuttle back to the hotel with Mike and his family. When we got back to our room, a big part of me still wanted to go home.  Sunday after the race was supposed to be about celebrating another marathon finish. But what did I have to celebrate? Mrs. Ansky convinced me that yes, we here for my race, but we also here for a mini-vacation and we shouldn't ruin it for Lil Ansky. We paid a visit to the Magic Hat Brewing Company which was right around the corner from our hotel. We picked up a super-sized bottle of #9 and a bottle of Vinyl to drown my sorrows in later.

Next up was a visit to the Ben and Jerry's Factory in Waterbury. There is no ice cream production on the weekends but we enjoyed hearing Ben Cohen and Jerry Greenfield's story. The tour ended with samples of their latest flavor, Late Night Snack which features Jimmy Fallon on the packaging. It's a vanilla bean ice cream with a salty caramel swirl, and fudge covered potato chip clusters. Great combination of salty and sweet. The sample wasn't enough to satisfy us so we each enjoyed a cup from the on-site scoop shop, Phish Food for Mrs. and Lil Ansky, Peanut Brittle for me.

After dinner we gave Lil Ansky the choice of swimming or Kung Fu Panda 2. She chose the movie which was cute but not as good as the first one. After putting Lil Ansky to bed, the Mrs. and I enjoyed our beers and Star Wars: Episode I which was on TV and went to bed.

Monday
Surprisingly, I woke up Monday in much better spirits. I wasn't 100% ready to put the DNF behind  me and move on, but I was beginning to realize that not finishing was not a result of something I did wrong during the race. I didn't go out too fast, I wasn't dehydrated, Mother Nature beat me fair and square. It was completely out of my control. It happens to the best runners in the world, at VCM it happened to Jen and to Laura, it happened to many other friends over their racing careers, and it happened to me. DNFing is part of our sport, not every race is going to be perfect.

Am I still disappointed that I returned from Vermont without a finisher's medal around my neck? Of course I am. With that said, I came home with my health, a loving and supportive family, and friends who care. It doesn't matter if we've met in person or only virtually I consider you all friends and I thank you for all the tweets, Facebook comments, and texts. DNFing is very humbling but I'm now ready to put it behind me, regroup, and get ready to tear up the Marine Corps Marathon in October.
Posted by Ansky at 9:59 PM

Ansky
United States
I live in Bergen County, NJ and work in NYC. Most of my weekday runs are done in Manhattan or Central Park. My weekend long runs are on the streets of suburban Bergen County.